The distribution system models we've looked at thus far have been perfectly adequate for evaluating many common smart grid scenarios but they have relatively simple architectures. In this chapter, we'll look at how to include a number of additional components that GridLAB-D has modeled that will allow the construction of more realistic electrical distribution systems, systems that are much more similar to what is in use today.

One of the great challenges for distribution system design is managing voltage under the wide range of loading conditions a distribution feeder experiences over a daily and annual load patterns. ANSI C.84 is the most commonly used in the United States and it defines the acceptable range of voltages based on location in the system with the most stringent being at the service entrance to the customers, nominally 114 V to 126 V a range of +/- 5% of the nominal 120 V.

Similarly, targeting a fixed output voltage fails to take into account the loading on the circuit. When the loads are lighter the voltage regulator need not adjust up as much due to the lower voltage drop on the downstream line. When the load is heavier, these additional adjustments are necessary to maintain the voltage with the ANSI specification.

To demonstrate the operation of the voltage regulator, we start where we left off with the battery and solar PV model. Relatively speaking, this is a small model with very light loads and if this was the system in real-life scenario, we wouldn't need to bother with a voltage regulator. So, to make the situation more interesting, two changes were made to the model:

Both of these changes will result in greater voltage drops for relatively small currents which will make the operation of the voltage regulator more important.

Opening up dist_sys_voltage_regulator_ldc.glm shows these two changes to the model with the addition of in the inclusion of a voltage regulator at the head of the feeder (the substation) and an extra recorder to monitor the voltages down branch 1 and the tap position of the voltage regulator. Looking at the configuration for the regulator we see

To understand all of these setting requires more time and space than we have here but the model used in GridLAB-D is based on that set-out in Kersting. Without trying to dig into the details, we can look at through these settings and get a rough idea of how the regulator is set-up to work.

regulation 0.10 indicates that a 10% change will occur from neutral (tap position 0) to the extreme lower or upper positions (tap position +/- 16). compensator_r_setting_A 1.5, compensator_x_setting_A 3.0 are the most important. They show that the modeled effective impedance to the end of the line results in a voltage drop of 0.1 + j0.1 volts (on a 120V basis). The units on this are a bit odd but they are very practical; rather than having to measure or calculate the effective impedance to the end of the line, a simple measurement at that point can directly be used in defining the settings for the line-drop compensator.

Running the model shows there are some problems, though. Looking at "voltage_data.csv" shows that when the simulation starts, the voltage regulator is producing an acceptable voltage for all three residences, roughly 122 V. In the afternoon when the load increases the voltage drop on the line also increases and we start seeing lower voltages, down to 116V on the very last house in the branch. During this period, the voltage regulator does not responde, indicating the modeled impedance in the line-drop compensator is set too low. That is, when the load in the circuit increase, the voltage drop modeled by the line-drop compensator is too little and causing the regulator to believe that no response is needed.

To correct this, let's just guess at new values for the line-drop compensator and re-run the simulation.

Re-running this simulation shows that the regulator does a much better job of responding the to changing loading conditions on this branch of the feeder and adjusts as the load changes, namely the air-conditioners switching on and off.

With communication systems becoming a more common part of electrical distribution systems new techniques of handling the setting of voltage regulation have arrived. Namely, rather than modeling and estimating the voltage at the end of the line, why not just measure it and send that information back to the voltage regulator? GridLAB-D support just such an operational mode.

Open up dist_sys_voltage_regulator_sense.glm and take a look at how the voltage regulator is configured.

The regulator itself now defines a sense_node which, as you might guess, is the node at which the voltage will be measured for regulation purposes. The regulator_configuration object is simpler with no more compensator settings and the control set to REMOTE_NODE instead of LINE_DROP_COMP. (The CT_phase, PT_phase, and control_level have also been changed to eliminate some extraneous warnings about voltages in phase B and C where there is no load in this system. The example systems we've been using are massively unbalanced which in the real-world would be a serious problem but in simulation, is something we can safely ignore.)

Running this model produces the following warning in the console:

As the message indicates, the first house in branch 1 has a voltage that is slightly too high. Opening up "voltage_data.csv" shows this is the case, particularly in the afternoon under heavier loading.

In the regulator object change the sense node to

and re-run the simulation. The result: no warnings and "voltage_data_.csv" confirms that all three residential voltages are much closer to nominal.

Capacitors are another common device used to help manage the voltage on the distribution system. Particularly during summer days with air-conditioners presenting a high inductive load to the system, a significant portion of the current flowing over the distribution lines is reactive. The default source of this reactive current comes from the substation which can lead to non-trivial voltage drops as the reactive current travels to and from the reactive loads in the distribution system. By providing an alternative source of reactive power closer to the loads (capacitors) the magnitude of the current flowing from the substation is reduced and the voltage profile of the feeder generally improves.

GridLAB-D provides the ability to add capacitors to the distribution system and to also control when they are switched into and out of the feeder. There are a few different control modes defined for the capacitor including manual control (constantly in or out or able to switched using a schedule or player, voltage-based, or reactive power based (VAR). Like the voltage regulator, the capacitors can either be switched individually or on a per-phase basis.

Open up dist_sys_capacitor.glm and take a look at the capacitor that has been added to the model.

We can see that the control mode has been set to VOLT and that this 10 kVAR capacitor (per phase) has been parented to branch_1_meter_3 at the end of the branch 1 line. Since the remote_sense property has been unspecified, the capacitor will use its own local voltage to determine when the switch; in this case when the voltage falls below 6900 V it will switch in and when it rises above 7100 V it will switch out. time_delay is used to model the amount of time it will take for the switching to take place once it has been commanded (2 seconds in this case), and dwell_time requires the switching condition be met for the specified period of time (10 seconds) before the switching operation is commanded. Between the two, the time between when the switching condition is met and when the switching will take place is twelve seconds. 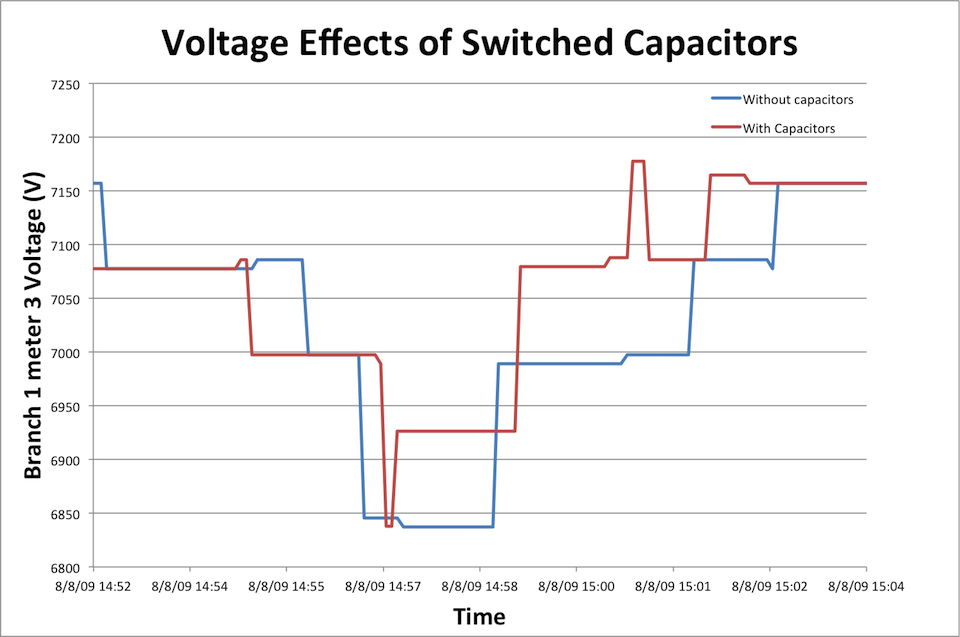