The Schedule object stems from the separate schedule methods present in several objects in GridLAB-D ~ after observing that the same basic system was in place in three different objects, the conclusion was made that the Schedule should be turned into a stand-alone class that can be used by many different classes with a minimum of effort.

When the Schedule initializes, it parses its schedule definition into a data structure that can be quickly traversed in order to determine the most desired value for the current time. This may be specific to the minute of the hour, to the hour of the day, to the day of the week, to the day of the month, and to the month of the year. Multiple fields may be used to narrow the particular field as desired. When the given time has been isolated, its value will be cached, and possibly pushed onto any subscribers. The schedule will then determine when it will change its value, and cache that timestamp for future use. If the schedule is called to synchronize when it does not need to determine its next value, it will short-circuit without pushing its value and without re-traversing its schedule.

The Schedule object will use the same formatting as the POSIX crontab utility. Absent scale values will be assumed to be 1.0.

Schedule objects may not contain more than four blocks of time values, and no block may have more than 63 unique nonzero values. All schedules implicitly use zero as the first value for their dynamic value range.

The schedule includes the following properties:

The schedule has public functions...

To define a generic bimodal schedule machine, the follow variables must be defined:

The use of schedules should be moderated due to their size of about 15MB apiece. If large numbers of objects take linearly related schedule input data, schedule transforms should be considered.

The present value in the raw load shape is copied to the property directly. If the energy is non-zero, then [math]power = value \times energy / interval[/math].

The power of the load is the average energy computed above divided by the load shape interval. Typically, this is 1 hour, so the power in (kW) is equal to the energy/duration in (kWh/h). Do not assume that this is always true.

The probability of a pulse being generated is proportional to the value multiplied by the scalar: [math]Prob\{on\} = value \times scalar[/math].

If the constant power, current, and/or impedance of the pulse is non-zero, then the duration of the pulse is the energy divided by the actual power: [math]duration = energy / power[/math].

Either power or duration must be specified. If neither is specified, it is an error.

There can be no more than one pulse per interval.

The loadshape value is the energy of a series of pulse generated during the interval and is equal to the shape value multiplied by the scalar: [math] count = value \times scalar[/math].

The energy specifies the total energy used during a complete load shape. The period is interval divided by the loadshape value: [math]period = interval / value / scalar[/math]. 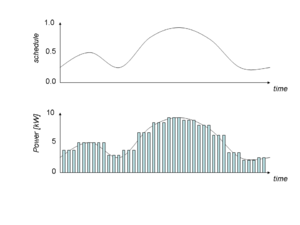 Modulated loadshapes where the power varies as a function of load have fixed duty cycle and period have amplitude modulation. AM is indicated by modulation = MMT_AMPLITUDE, and 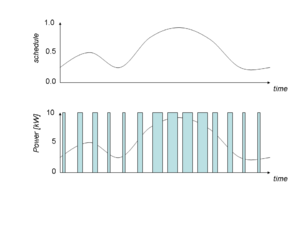 Figure 2b - Example of a pulse-width modulated loadshapes

Modulated loadshapes where the power is fixed and the period is fixed have pulse-width modulation. PWM is indicated by modulation = MMT_PULSEWIDTH, and

Modulated loadshapes where the power is fixed and the on-time is fixed have frequency modulation. FM is indicated by modulation = MMT_FREQUENCY, and

The normalized load shape value multiplied by the energy divided by the interval is the accrual rate [math]r_{off} = value \times scalar / interval [/math]. The queue must be initialized to a random value between [math]q_{on}[/math] and [math]q_{off}[/math], which are specified in the load shape.

If the power is non-zero, then when the load is on, the accrual rate also includes the power, e.g., [math]r_{on} = r_{off} - power / energy[/math]. The queue is incremented by the accrual rate times the timestep [math]q += r_x dt[/math]. When the queue exceeds [math]q_{on}[/math], the state of the machine switches to on, and the load is calculated accordinately (see below). When the queue falls below [math]q_{off}[/math], the state of the machine switches to off. The duration of a pulse is the time taken to move from [math]q_{on}[/math] to [math]q_{off}[/math] at the rate [math]r_{on}[/math].