This document introduces the models of power-electronics-based series compensators and a frequency controller designed for it. Some simulation examples are included to explain the model and the frequency control strategy.

Introduction of a Series Compensator 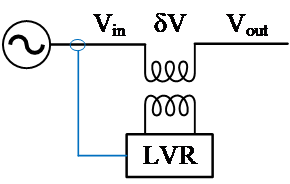 As shown in Figure 2, the series compensator generates a voltage δV, which has the same frequency and phase angle as the input voltage Vin,. The magnitude of δV can be either positive or negative. By changing the magnitude of δV, the load side voltage Vout can be compensated. 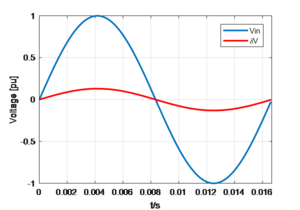 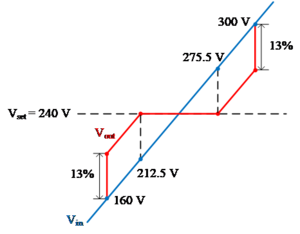 Modeling of the Series Compensator in GridLAB-D

Figure 4 and Figure 5 show the main circuit and controller of the series compensator modeled in GridLAB-D, respectively. As shown in Figure 4, the main circuit of the compensator is modeled as a regulator with a controllable turn ratio, n. By changing the turns ratio n quickly, the output voltage can be maintained constant when there is a disturbance at the input voltage. 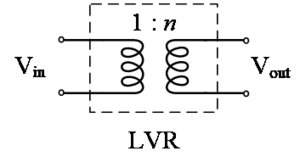 Figure 5 shows the controller designed to control the series compensator. It is a PI controller with maximum and minimum anti-wind-up limiters (nmax and nmin). VLset is the set point voltage, Vout is the load side voltage, Vin is the input voltage. kp and ki are the proportional and integrator gains, respectively. (In most of the cases kp is set 0) The function of the controller can be explained as follows: When the input voltage Vin is between 0.87 pu to 1.13 pu, the controller can always find a turns ratio n to maintain the output voltage at VLset. When the Vin is below 0.87 pu or is above 1.13 pu, the saturation limit of the controller will be reached. The turn ratio will be fixed at nmax=1.13pu or at nmin=0.87pu. Further, if the Vin is below 0.67 pu or is above 1.25 pu, the nmax or nmin will be changed to 1, which represents that the series compensator is bypassed. 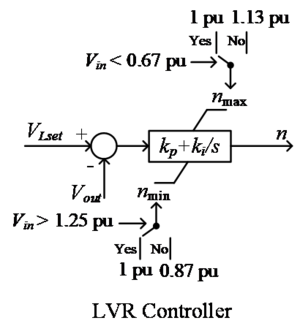 The frequency controller is simulated in a modified islanded IEEE 123-Node test feeder. The studied system is shown in Figure 8. As can be seen the substation voltage source is assumed to be out of service due to extreme weather events, and the three microgrids in the shaded area work together as an islanded networked microgrid. There are three diesel generators in the system as marked by the blue dots, and there are six PV inverters in the system as marked by the red dots. In addition, there are six series compensators installed in the system to regulate the voltages of the critical loads. The total capacity of the three diesel generators are 3 * 600 = 1800 kW, and the total capacity of the PV inverters are 1400 kW. The total loads in the networked microgrid is 2060 kW. There are 780 kW loads installed with series compensator, which accounts for 36% of the total loads in the islanded system. It should be noted that the loads are modeled as constant impedance loads and constant current loads. 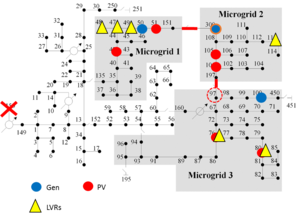 The simulation scenario is loss of one diesel generator. A comparative study is conducted with the frequency controller enabled and disenabled, respectively. The simulation results are shown below.

Figure 9 and Figure 10 show simulation results with the frequency controller disenabled for all six series compensators. When Diesel Generator 2 is tripped, there is a significant frequency drop during transient. As shown in Figure 9, the frequency nadir is around 58.2 Hz. There are also some voltage transients as shown in Figure 10. Because the frequency controller is disenabled, the series compensator maintains the output voltage at 1 pu. Therefore, although the primary voltage changes due to the loss of one generator, the output voltages of the series compensator are maintained at 1 pu. Although the voltage is well maintained, there is significant frequency drop during transient.

Figure 11 and 12 show simulation results with the frequency controller enabled for all six series compensators. During the same loss of generation event, being different from the previous case, the devices quickly reduce the voltage set points from 1 pu to 0.9 pu to reduce the power consumption of the load. As shown in Figure 11, the voltage at the primary side is not affected, but the voltage at the secondary side is reduced to 0.9 pu. This reduces about 4.8% of the total load of the system. Because of this sudden load reduction, we can see a major improvement in frequency response compared to previous case. As shown in Figure 11, the frequency nadir is improved from around 58.2 HZ to around 59.4 Hz.