The purpose of this document is to describe the specifications of the dishwasher class in the residential module.

Each state in the model is governed by a ZIP model with transitions between states determined by internal state transition rules. The multi-state dishwasher model is shown Figure 2. 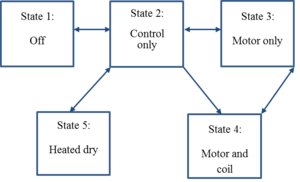 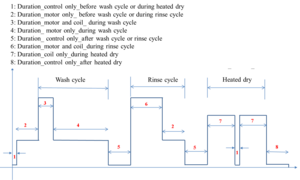 Table 1 below gives the logic for allowable state transitions shown in the multi-state dishwasher model.

The basic assumption made in the GridLAB-D implementation of the dishwasher model is that for each mode, the amount of energy needed by a dishwasher is constant. State transition times in this model are also fixed (however, user can change all transition times) as long as energy consumption of dishwasher is lower than the given base line energy (Model stops whenever total energy consumption exceeds the baseline energy and this can be possible any state of the dishwasher. Once model stops, it will not transit into any other states). Explicit hot water consumption from the water heater model is not considered at this point of time, but will be implemented in the future.= Specifications =

A common way to model the voltage response of a device is to model it as a collection of constant impedance, constant current, and constant power elements; the ZIP model [2]. Each state in the dishwasher model is governed by a ZIP model with transitions between states determined by internal state transition rules. The default ZIP components for each heating coil are modeled as 100% constant impedance, and motor at 100% constant power. All coils in this model assume to be the same ZIP fraction. Equation notation will follow:

Dishwasher is modeled as a generic one to allow the user to make change(s) to input variables such as total energy consumption, controls rating, motor power rating, coil ratings, time intervals between the states etc., to obtain different energy profiles. If user wants to skip the heated dry cycle, it can be done by setting the heated dry option to false. If heated dry is eliminated, dishwasher consumes 35% less energy than the normal mode. All the options that user has are listed in Table 2.

The dishwasher model shall use the residential enduse interface for all output.

Each cycle of operation involves a certain power draw (kW) from the power grid over the duration from start to finish. Furthermore, the rate of appliance usage or demand, i.e., average number of cycles per day is stochastic around some average value (to mimic the fact that in real life, demand for the usage of dishwasher is driven by dishwasher user’s behavior).

Let [math]D[/math] denotes the demand in cycles per day of a dishwasher. Note that depending on the value of [math]D[/math], a given dishwasher could turn on more than once or not at all during a given day's simulation of that dishwasher.

where [math]E_k[/math] denotes the energy consumed by the dishwasher over the [math]k^{th}[/math] time step as specified by ELCAP(integral of an ELCAP curve such as the one shown in Figure 4 between [math](k-1)T[/math] )[math]kT[/math]) and [math]E_{tot}[/math] denotes the total energy consumed by the appliance over the course of a day as specified by ELCAP. The ratio [math]Ek/E_{tot}[/math] gives a measure of the percentage of daily appliance consumption over the [math]k^{th}[/math] time step, and a plot of [math]E_k/E_{tot}[/math] as a function of [math]kT[/math] gives the normalized ELCAP dishwasher load shape. The difference Equation (1.1) is initialized to a random number [math]q_o[/math] (1.2). 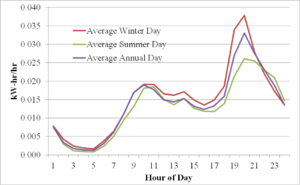 Note that there is an interesting physical interpretation of [math]queue(k)[/math]. Basically, dishwasher is placed in its 'queue', and waiting its turn to be turned on. And after each simulation time step of duration [math]T[/math], [math]queue(k)[/math] is incremented by an amount that is proportional to its daily demand. In other words, each appliance’s ‘queue’ is being built up or accumulated. And the rate at which the ‘queue’ is accumulated depends on the normalized load shape [math]Ek/E_{tot}[/math]. Thus higher value of [math]Ek/E_{tot}[/math] would result in a higher rate at which an dishwasher’s ‘queue’ is accumulated, and the following logic is utilized to determine when to turn on a particular appliance

and accumulated again in accordance with Equation (1.1) to be turned on again at some later time. Intuitively, it is clear that the probability that a given appliance i is turned on depends on its daily demand [math]D[/math], and the value of the normalized appliance load shape [math]Ek/E_{tot}[/math] at any given time [math]kT[/math]. The higher these quantities are, the higher is the probability of the given appliance turning on.

Dishwasher model needs to be properly timed with the requirements of the individual dishwasher components.