From GridLAB-D Wiki
(Redirected from Spec:TDIntegration)
Jump to: navigation, search

The network module shall include three classes: pw_model, pw_load, and pw_recorder. These are all base GridLAB-D and C++ classes, without any additional inheritance.

As the pw_model signals that objects have requested an update, the pw_recorder object shall observe and recorder the state of the network module. 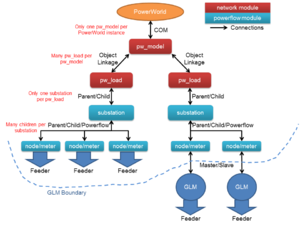 A basic structure for the interactions of the network pw_ objects, PowerWorld, and the powerflow module are shown in Figure 1.

The following describes the order in which operations are to occur for the network module's objects as GridLAB-D loads, runs, and stops gracefully.

No actions occur during precommit.

The first action of each pass is to check if the PowerWorld model is within convergence limits. If the pw_model has flagged the transmission solver needs to run, it will send a message to PowerWorld to run the 'Run Simulation' script.

At the end of sync, powerflow will have accumulated the power load values up to the top of the system. The substation object will pass the load values up to the pw_load object before the pw_load object syncs. Details for the condition of the substation update to pw_load are noted below. If a given pw_load's power load changes between iterations by more than a certain threshold, it shall set a flag in pw_model that indicates the transmission solver solution needs to be updated.

Each pw_load shall check its pw_model object has been flagged to recalculate the transmission solver. If it has, each pw_load shall post its load to PowerWorld via the SIMAuto module, or through a proxy connector.

Any active pw_recorder objects shall check if the write timer has ticked, and will write values to an output stream accordingly.

The pw_model closes the PowerWorld model, and severs the connection to SIMAuto or the proxy connector. Any open pw_recorder files write a footer, flush pending write operations, and close the file.

The pw_model class opens a model, provides a mechanism for triggering a PowerWorld recalculation, and cleans the system up at the end of the simulation.

The GridLAB-D model must only have one substation attached to the pw_load object, or the model may not run correctly.

The pw_load class shall defer its initialization until after its pw_model has initialized.

The bus and load IDs specified in the GridLAB-D object must exist in PowerWorld, or the model will fail to initialize.

The published voltage outputs are read by the substation object that uses the pw_load as a parent.

The substation will keep all of it's previous functionality and properties with the exception of the hooks to the old network module. Substation will continue to be a child class of the node object inside the powerflow module. Listed below are the additional properties that will interact with the pw_load object.

Substation will extract the positive sequence value from its pw_load connection (load_voltage) in the presync pass. If the solver is Newton-Raphson (NR), this will occur only when the NR_cycle is false. Forward-Back Sweep (FBS) will extract this value at the beginning of every presync pass. Since the substation should be higher ranked than the "SWING" node of the powerflow (or equivalent top node in FBS), current and power values can be available at the end of the sync pass. However, to maintain compatibility with current powerflow implementations, the values will only be posted to pw_load on the NR_cycle true pass. This will be true for both the FBS and the NR solvers. In addition, the NR solver should only post changes when the NR_admit_change is false (under current functionality). With the FBS solver, only the NR_cycle flag must be considered.

Substation will use the following equation to convert the positive sequence value from its pw_load connection (load_voltage) to the three phase balanced voltages used as the swing bus voltage solution.

The average phase load is determined by the below equation. All variables are complex values not the real power loads.

Please note that the transmission current and impedance loads will be converted to complex power values first and then posted to the proper properties(load_current and load_impedance) in the pw_load object. The average_transmission_power_load value must be added to the average_distribution_load before posting to pw_load(load_power).

The pw_recorder accesses and records published values from specified fields in one specified PowerWorld object. Data is read from PowerWorld whenever the model updates. Data is written only to an output file, and writes occur on specified intervals.

During commit, the pw_recorder writes a line into a file on fixed intervals. This line will include the values observed from the specified object, from the properties enumerated in the "properties" field. When a number of lines have been written to the file equal to the "limit" field, the output file will close and the pw_recorder will go out of service. If limit is 1, the only output will be at the beginning of the simulation. If the limit is less than 1, there will be no limit to the number of lines written.

The primary method for GridLAB-D to communicate with PowerWorld shall be through the PowerWorld SIMAuto COM interface, making direct C/C++ function calls. The SIMAuto interface is described in the PowerWorld online help files.

The basic unit tests will include, in order:

A proposed idea is to use a lightweight client (a "go-between") that exchanges data and commands with GridLAB-D over a network interface, converting the messages for use in PowerWorld. This would allow GridLAB-D to run on a Linux computer while using the network module.